Finally we’ve reached the end of Blackstone Fortress and it’s only fitting I saved what ended up being my favorite models for last. Starting with Janus Draik, arguably the main character of the game if there was one, I opted to keep his color scheme as close to the official paint job as possible. A lot of the colors and techniques for things like his coat, the pelt draped over his shoulders and his skin tone I’ve already gone into in previous blog posts, so I don’t have much to say except that I love the pose and the cigarette is a nice touch. 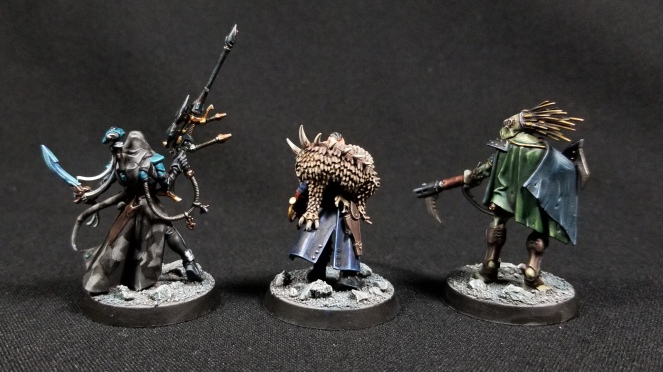 I actually stalled out on Dahyak Grekh, the Kroot Tracker, for awhile. I spent a few days trying to find a skin tone that I felt would fit the gloomy atmosphere of Blackstone Fortress, since the official paint job was a little too warm of a green. None of the stock Citadel paints seemed to serve as good jumping off points for what I was looking for, and there actually weren’t many paint jobs online that were inspiring me either.

It wasn’t until I came across this one guy’s Instagram account. His take on the Kroot skin tone was more inspired by the old school paint jobs you would’ve seen in the early 2000s, and just nailed that cold look I was going for. He was nice enough to give me some tips, but being that this was well over half a year ago, I’m struggling to remember how I ended up doing it. Something like mixing Administratum Grey with Ogryn Camo to start, then mixing in Abaddon Black to shade, and progressively more White Scar to highlight. There was a lot of improvisation that I don’t think I would do if I were trying to copy the technique over multiple troops, but since this was a one off, it was nice to try something different.  Anyway, shout out to IG: dweeziedie from Stockholm Warpaint for the advice.

And last but certainly not least, Amallyn Shadowguide. I was pretty much obligated to paint her armor in the colors of my “home” Craftworld, and not just because her Biel-Tani iteration was, again, too bright to fit the mood I was going for. The only thing I took from her original paint scheme was the rifle, since it was dark and sleek, but still ornate enough to stand out. It’s also kind of a character on its own, just like Pious Vorne’s flamer.

Her cloak was just a random pattern of jagged shapes using Abaddon Black, Mechanicus Standard Grey, Dawnstone and Administratum Grey to highlight certain shapes. I feel like I could have done a better job, but the camo ended up being understated enough in a way that I liked. Happy accidents and all that.

It was kind of nice being able to close out this box with an Aeldari model after painting so many non-Eldar. Though admittedly there is still a UR-025 sitting around. I might try experimenting with some Contrast Paints, but after finishing Amallyn, I’m just about ready to call this project done so I can finally play the damn game.

On to the next.