I’ve always had a tendency to gravitate towards more mobile, high damage dealing characters in video games.  Not necessarily where high risk = high reward, but where playing with a bit of finesse rewards the player with something a little extra.  Assassins and Hunters in RPGs, and characters like Juri from Street Fighter and Xianghua from Soul Calibur come to mind.  Like many others I know who played through Dawn of War’s campaign with little to no prior knowledge of the massive 40k universe, my first window into the world was through the lens of the poster boys of 40k: The Space Marines.

They are bad ass.  Warrior monks in futuristic armor shouting lines like “And we shall know no fear!” as they faced impossible odds were bad ass.  Captain Gabriel Angelos of the Blood Ravens is still one of the most memorable and inspiring faction leaders in RTS memory for me.  But when the campaign was said and done and it was time to go online, I felt obligated to give the other factions a try.  It’s worth noting in the original Dawn of War’s single player mode, you only ever played as Space Marines.  Chaos Space Marines at the time felt like a spikier reskin of their loyalist counterparts.  Orks were fun and funny, but at times felt mindless.

Then of course there were the Eldar, who if you had played through the campaign you might remember as the guys (and gals) with weird voices who loved to run into  bolterfire and die in droves as much as Orks, but with half the effort.  I still gave them an honest try, and something stuck.  When played properly, they could dismantle armies while taking few losses.  But lose concentration or get flustered and it was easier to put yourself in a position where you couldn’t come back compared to the other, hardier factions.  I liked it. 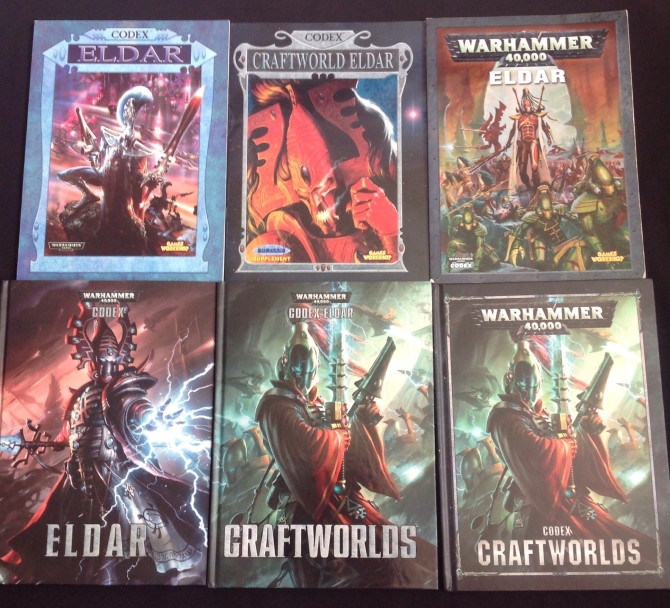 When they really settled in and became my main faction, I started reading up on their background.  The more I read, the more I wanted to know; and before long I thought these mysterious, space faring, psychic elves with a bit of Asian influences peppered in were the coolest thing ever.  Inevitably, I started reading more on the setting as a whole and tidbits on other armies and factions in 40k lore and decided it was something I wanted to delve into deeper.  So I picked up the 4th edition rulebook, Eldar codex and a few models, not really caring what what armies were considered strong or not at the time.  I guess the general consensus is that they dragged a bit in 5th, but from 6th onward, they’ve been broken and cheesy.  Oh well.  Something something arrogance matched only by firepower something something.