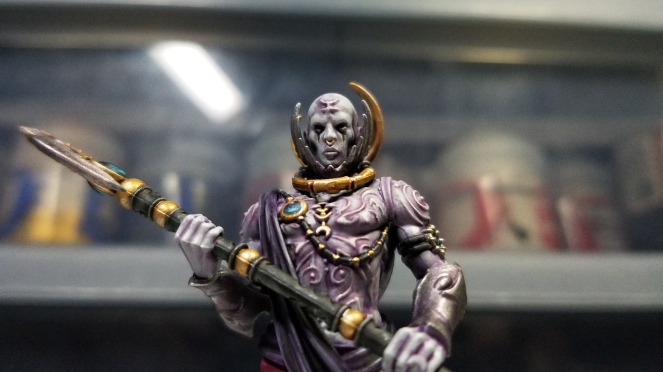 It’s a little funny when you think of someone who started their Warhammer career as an Eldar player before going all in on Dark Eldar eventually “falling” to the temptation of building a Slaaneshi army, but here we are. After finishing Blackstone Fortress I had hoped to put a lot of time into Kill Team (and later Warcry) related projects, but those were sidelined by the growing number of Slaanesh models I found myself accumulating.

When the Wrath and Rapture box set came out, the prices for a lot of the models in the set, especially older ones, were driven down as you might expect. Initially, I picked up a single squad of Daemonettes with the intention of painting them as a one off project, but seeing how cheap some people were selling off the Slaanesh half of that box, I figured why not assemble a modest 500-750 point army. It wasn’t too long after that we got hit with the Hedonites of Slaanesh release, and in addition to the new Fiends and Infernal Enrapturess we already got, we saw some sick new models like Syll’Esske, The Contorted Epitome and mercifully, a completely redesigned Keeper of Secrets.

And so I was sold. Part of me does wonder how many armies have been started with a single squad and the owner thinking, “Okay, just this one and nothing else…”

At the moment, everything I’m posting is a work in progress. I’m still finalizing some colors, since I want as much uniformity across the army as possible. I will say that one of the nice things about starting a completely new army is being able to switch over to a color palette — in this case greys, purples and pinks — that you don’t normally work with much otherwise.  My earliest stumbling block however, was just finding a skin tone for Daemonettes that I’d be happy with. And I better be happy with it because I’d be painting it at least 60 times over. My initial attempts were much more purple than the slightly off-grey that you see in the official Daemonette paint job, but I eventually did settle on a method. Something I’ll go into in a future post.

Another opportunity working with this army gave me was the chance to really put Contrast Paints to the test. This is really just a side project at best and I would eventually like to get back to the multitude of other projects I have lined up sooner than later, with as little burnout as possible. And you know what? For the amount of effort I put into the Seekers above, I would say that Contrast Paints absolutely do what they were meant to do, and then some. Really happy with the result.

Anyway, with all the new great additions to the range, I probably wouldn’t be making this much of an investment into this army if it wasn’t compatible with both 40k and Age of Sigmar, the latter of which I’ve been toying with the idea of dipping my toes into for awhile. Apparently, Hedonites are a really strong army at the moment too, which is always nice. These, combined with the growing stockpile of Sylvaneth models — which will sadly accumulate dust for the forseeable future — means that I’m finally onboard the Sigmar train.

After dragging my feet early on, I’ve finally made decent progress over the past few months finishing 30 Daemonettes, 10 Seekers, an Exalted Chariot, the Infernal Enrapturess and Syll’Esske. I’m just waiting on the weather to warm up a bit so I can varnish them and base them properly. After that I’m still looking at two Daemon Princes, a Contorted Epitome, 30 more Daemonettes, 3 Fiends, The Masque and of course a Keeper of Secrets. Whew.

I’ve got my work cut out for me. Somewhere in the middle of all that, I’ll probably find some time to crack open the Warcry starter because I’ve been itching to get started on that for awhile now.